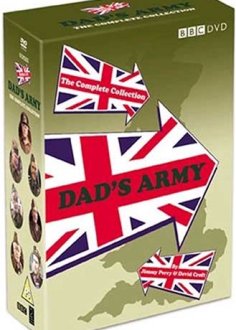 This all-encompassing collection features every series and each of the specials from the hilarious, yet timeless sitcom, DAD’S ARMY.

Dad’s Army was created and written by Jimmy Perry and David Croft, the duo who were also responsible for ‘Allo Allo’ – Hi-De-Hi and It Ain’t Half Hot, Mum. Perry came up with the idea when it struck him that people had forgotten the role that the Home Guard played in the Second World War.

The sitcom followed the farcical exploits of the Walmington-on-Sea platoon, led by Captain Mainwaring (Arthur Lowe) and it ran on TV from 1968 to 1977. The story begins in May 1940 with Sir Anthony Eden’s plea to men to come forward as Local Defence Volunteers. In the fictional town of Walmington, the pompous bank manager George Mainwaring declares himself commanding officer (“Times of peril always bring great men to the fore,”) and gathers together a loyal but incompetent platoon of local men to defend the town against invasion.

Although reviewers initially criticised the series for mocking the Home Guard, the plotline was surprisingly realistic. The real Home Guard lacked uniforms and weapons at first, and the huge influx of volunteers meant that the organisation was quite shambolic. The age limit for recruits was supposed to be 65, but this was not enforced to begin with, allowing First World War veterans in their seventies and eighties to creep in.

Dad’s Army had its own elderly, incontinent Private Godfrey, played by Arnold Ridley, who had fought in WW1 himself. The actor was seriously injured at the Somme, rendering his left arm almost useless, and leaving him susceptible to blackouts.

Among the rest of the cast were Clive Dunn (who simultaneously drew in a different audience as the chart-topping pop star ‘Grandad’), Hattie Jacques’ former husband, John le Mesurier and a baby-faced Ian Lavender, who has since resurfaced as Derek in EastEnders.