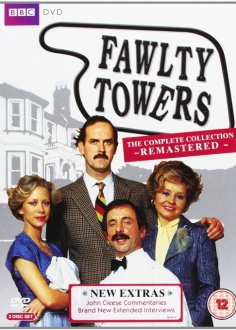 Fawlty Towers was famously inspired by an unbelievably rude hotel proprietor John Cleese encountered whilst filming with Monty Python. Written by John Cleese and Connie-Booth, Fawlty Towers remains one of the most inspired and best-loved TV series of all time.

This Special Edition marks the 30th anniversary of one of the greatest situation comedies British television has ever seen. Every episode of the BAFTA-winning sitcom has been fantastically remastered and for the first time ever John Cleese provides audio commentaries on all 12 episodes. Cast to perfection the series found Cleese playing much put-upon Torquay hotel owner Basil Fawlty, Prunella Scales as his domineering wife Sybil, Connie Booth as Polly, the dependable maid and Andrew Sachs in the role of Manuel, the non-comprehending, tyrannized waiter from Barcelona.

Each storyline remains a classic, with every guest another incovenience in Basil’s life – from the regulars, eccentric dodderer Major Gowen and charming elderly ladies Miss Gatsby and Miss Tibbs, to visitors such as Bernard Cribbins’ fastidious spoon salesman and the deaf but imperious Joan Sanderson as Miss Richards. Whether it is builders, Germans, wedding guests, American tourists, corpses or even rats, there’s always someone or something to drive Basil to desperation.

Fawlty Towers remains as popular today as it has ever been and now remastered, this comic masterpiece is ready to be savoured again and again.